For years, Resonate Consultants, an Australian acoustic engineering company, were using the same employee engagement platform, but they simply weren’t seeing results. The questions were random, they were sent to different employees at different times, and when staff did submit comments, particularly challenging ones, there were no meaningful conversations or further actions.

At the start of 2020, Resonate Consultants knew what they were trying to achieve. Their goal was to build engaged teams focused on innovation, which in turn would generate new revenue. They also had a clear objective to be recognised as an employer of choice and receive the Great Place to Work® Australia New Zealand certification.

What Resonate Consultants needed was a team engagement tool that would actually support them to deliver their strategic plan, while creating a space where employees felt valued & secure.

“We can’t be an employer of choice unless the employees we already have are happy, and it’s very difficult to grow the team if we are also losing some, or to get new people onboard if there’s that sense that some employees are moving on”, said Sarah Leo, CEO at Resonate Consultants.

In February 2020, Resonate Consultants decided that Teamgage was what they needed; it would directly impact engagement from the team and embed a practice of continuous improvement. Both were critical for their renewed focus on innovation and to support their quality system. Teamgage would also enable them to drive employee safety, a strategic focus for the Board, and measure engagement and actions across the entire organisation.

After collaborating with Teamgage, Resonate Consultants decided to focus on 6 strategic metrics:

These metrics blended organisation-wide goals and the company values (distinctive, client-centric, responsible, united and ingenious), with specific focus areas where teams could directly influence their own improvements - it was about alignment with autonomy. With these metrics in place, the next step was supporting and encouraging leaders to have meaningful and engaging conversations with their teams.

“There was a learning curve for the leadership team, but after some education and the support from the Teamgage team, we got there”, said Sarah.

Only a few months into using Teamgage, it was clear that safety was a concern for employees. Both the qualitative and quantitative data Teamgage surfaced reflected this. Before the concerns escalated, or led to an actual incident, leaders and executives used Teamgage to identify specific safety challenges and create actions to solve them.

“Teamgage makes it easy for staff to provide feedback. More importantly, the system encourages leaders and teams to have those targeted conversations around topics that were raised in a confidential way. You can also customise the questions and make it more relevant to your business needs.”

Introducing Teamgage has also empowered Resonate Consultants to try other new team engagement practices, particularly in how people come together. There’s now monthly online catch-ups at individual team levels to look at their team results and a fortnightly All-Team Meeting with a set agenda focused on company wide alignment. Whereas the company used to rely on a single big annual review, these agile team practices build engagement and keep the focus clear throughout the year; especially on strategic objectives like safety and sharing lessons learned.

“Teamgage gives employees the opportunity to anonymously raise topics that people might feel uncomfortable with. Also, Teamgage is a tool that encourages conversations and actions, so it opens opportunities to have further discussions in the workplace”, continued Sarah.

The impact of team engagement

“Some of those survey results have aligned with some of the improvements experienced via Teamgage. For example, 100% of the employees said they felt that Resonate Consultants provided a physically safe workplace. To me this was quite significant, as we identified safety as an area of improvement when we started using the team engagement platform”, mentioned Sarah.

In only a few months, Client Service performance has increased by 13%. Being client centric is one of Resonate Consultants’ core values that directly impacts the company’s bottom line. But in second half of 2021 team performance on this metric saw an unexpected decline. Leaders diagnosed the issue with Teamgage, identifying the underlying causes specifically related to high workloads and deadlines.

Resonate Consultants also boasts a Teamgage participation rate of 60%. Across the organisation, every month, every team is having specific conversations about how they can improve the way they work together.

“Our team leaders are now more engaged and spending more time focusing on their teams than they were previously. I strongly believe that Teamgage is an enabler for success”, shared Sarah.

Having already achieved the change they wanted, Resonate Consultants is not stopping.

The organisation is now renewing goals and refining their strategic metrics for the year ahead. This includes the introduction of a Teamgage metric for Professional development and creating a focus at the team level on care amongst colleagues, working ethically and driving accountability.

“Teamgage gives teams a space to add anonymous comments and observations that are otherwise hard to raise. The structure of the platform allows us to focus on discussion rather than the individual. Because of that, we can systemize the problem, rather than making it personal, so that people feel safe to raise issues.

Teamgage is also a helpful tool to delegate actions and make sure that the team feels involved in the company's development, not just leadership. It’s not just a piece of software, it’s actually bigger than that. It’s about best practice for having continuous improvement conversations.”

Discover how we're improving organisations in your industry 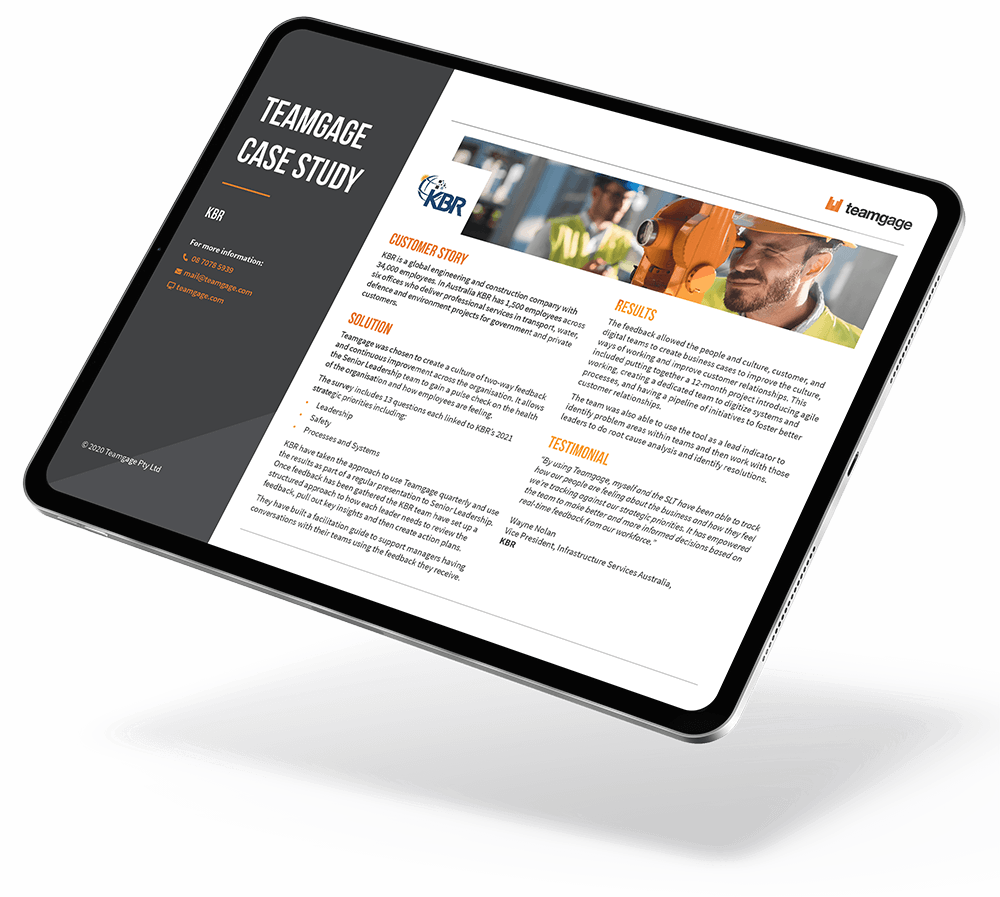